You are here: Home1 / FAQ2 / Types of Sailboats by Type of Rig

To have a better idea of which types of sailboats would best suit your needs, your YACHTS INVEST broker can advise you on the various options available on the market for new or second-hand vessels as well as new construction. In the meantime, here is a summarized guide to the different categories of sailing yachts by type of rig, whether they are monohull (single hull) or multihull, as they’re called in the Mediterranean. 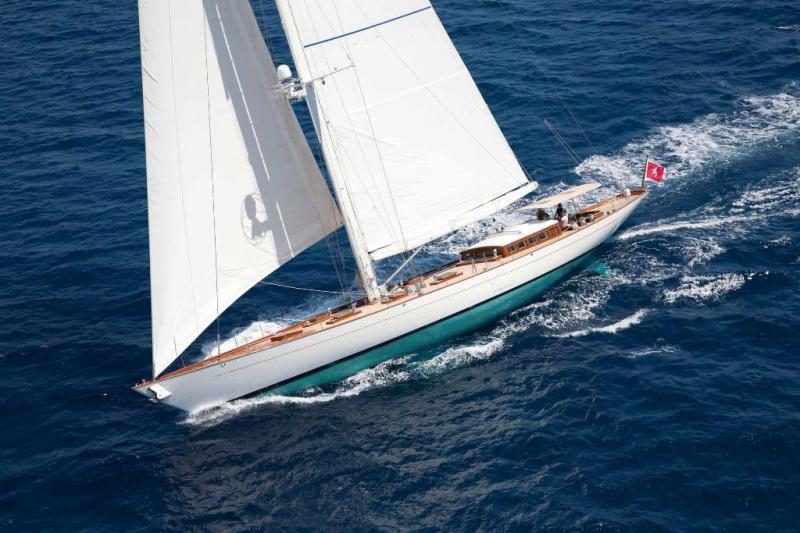 The most common monohull modern sailing yacht is the sloop, which features one mast and two sails, thus sloops are single-masted sailboats. If they have just two sails — a foresail and a headsail — then they’re a Bermudan sloop, the purest type of sailboat. This simple configuration is very efficient for sailing into the wind.

Sailing sloops with moderate rigs are probably the most popular of all cruising sailboats. Just a single-masted sailboat with two sails (a foresail or headsail, and a mainsail) and the minimum of rigging and sail control lines they are relatively simple to operate and less expensive than rigs with multiple masts.

Sloops are adapted for cruising as well as racing, depending on the height and size of their rig.

The cutter sailing yacht is also a monohull similar to a sloop with a single mast and mainsail but generally carries the mast further aft to allow for a jib and staysail to be attached to the head stay and inner forestay, respectively. Once a common racing configuration, today it gives versatility to cruising boats, especially in allowing a small staysail to be flown from the inner stay in high winds.

Thus, a cutter-rig sailboat has an additional sail (the staysail) set on its own stay between the foresail and the headsail.

Cutters are mostly adapted for cruising, but capable of good performance while racing as well.

A ketch is a two-masted sailboat, the main-mast forward and a shorter mizzen mast aft.

But not all two-masted sailboats are ketches — they might be yawls.

A ketch may also carry a staysail, with or without a bowsprit, in which case it would be known as a cutter-rigged ketch.

Yawls have their origins as old-time sail fishing boats, where the small mizzen sail was trimmed to keep the vessel steady when hauling the nets.

Thus, a yawl is also a monohull, similar to a ketch, with a shorter mizzen mast carried astern the rudderpost more for balancing the helm than propulsion. 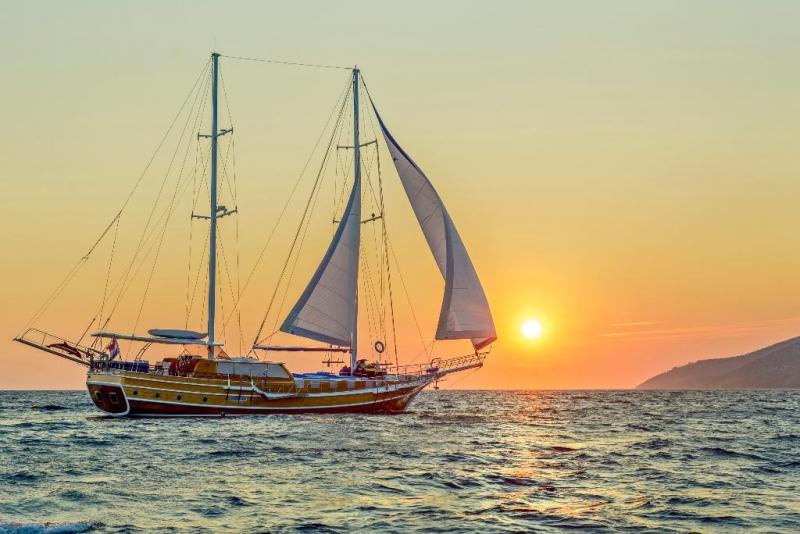 A schooner has a mainmast taller than its foremast, distinguishing it from a ketch or a yawl. A schooner can have more than two masts, with the foremast always lower than the foremost main. Traditional topsail schooners have topmasts allowing triangular topsails sails to be flown above their gaff sails; many modern schooners are Bermuda rigged.

A schooner is a two-(or more) masted sailboat, in which the aft-most mast – the mainmast – is the same height or taller than the foremast. Many sailors agree that of all the different types of sailboats, a schooner under full sail is one of the most beautiful sights afloat.

Gaffed-rigged sailboats, or “gaffers”, have their mainsail supported by a spar – the “gaff” – which is hauled up the mast by a separate halyard. Often these types of sailboats are rigged with a topsail. The gaff rig is no longer seen on modern production yachts.

A catamaran (‘cat’ for short) is a multihull yacht consisting of two parallel hulls of equal size.

A catamaran is geometry-stabilized, that is, it derives its stability from its wide beam, rather than having a ballasted keel like a monohull. Being ballast-free and lighter than a monohull, a catamaran can have a very shallow draught. The two hulls will be much finer than a monohull’s, allowing reduced drag and faster speeds in some conditions, although the high wetted surface area is detrimental in lower wind speeds, but allows much more accommodations, living and entertaining space in stability and comfort. 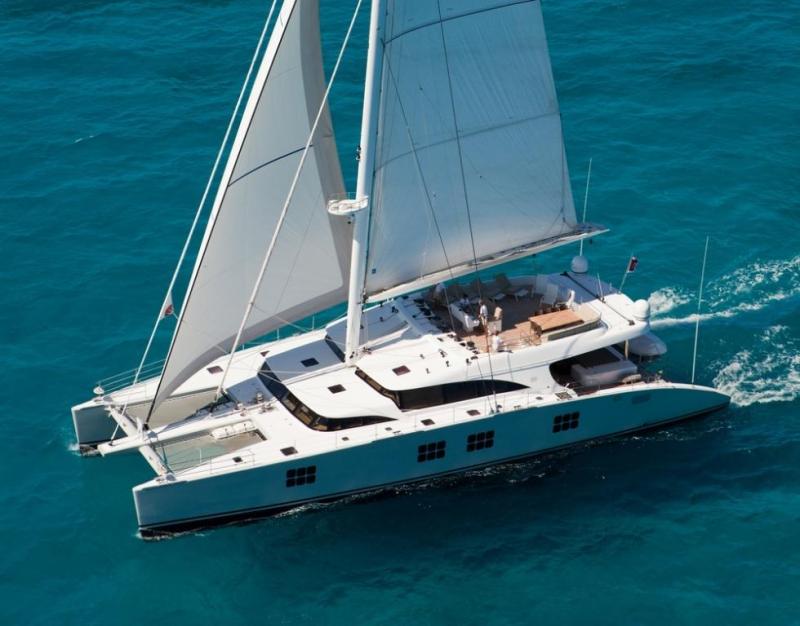 The speed and stability of these catamarans have made them a popular pleasure craft in Europe, most high-quality catamarans are built in France, but careful since their wide beams aren’t easy (or cheap) to berth in the French Riviera.

Racing catamarans technology has made them today’s leading racing sailboats of the world, like in the latest editions of America’s cup or other renowned transoceanic races.

Please surf through our website listings of sailing catamarans.

Even harder to berth in the Mediterranean, and most commonly designed for around-the-globe racing rather than cruising, the trimarans have also been gaining some popularity in the western hemisphere, especially by naval designers with futuristic projects.

A trimaran is a multihull boat that comprises a main hull and two smaller outrigger hulls (or ‘floats’) which are attached to the main hull with lateral beams.

A motorsailer or “motorsailor”, is a type of sailing vessel, typically a pleasure yacht, that derives propulsion from its sails and engine(s) in equal measure.

While the sailing yacht appeals primarily to the purist sailing enthusiast, the motorsailer is more suited for long-distance cruising, as a home for ‘live-aboard’ yachtsmen. The special features of the motorsailer (large engine, smaller sails, etc.) mean that, while it may not be the fastest boat under sail, the vessel is easily handled by a small crew. As such, it can be ideal for retired people who might not be entirely physically able to handle large sail areas. In heavy weather, the motorsailer’s large engine allows it to punch into a headwind when necessary to make landfall, without endless tacking to windward.

The Turkish word gulet is a loanword from the French goélette, meaning ‘schooner’.

A gulet is a traditional design of a two-masted (more common) or even three-masted wooden sailing vessel from the southwestern coast of Turkey, particularly built in the coastal towns of Bodrum and Marmaris; although similar vessels can be found all around the eastern Mediterranean. For considerations of crew economy, Diesel power is commonly used on these vessels, similar to a motorsailer. Today, this type of vessel, varying in size from 14 to 45 meters, is very popular and affordable for tourist charters in Turkey, the Aegean, Greece and up to Croatia in the Adriatic.

Please surf through our website listings of cruising sailing yachts by type of rig. 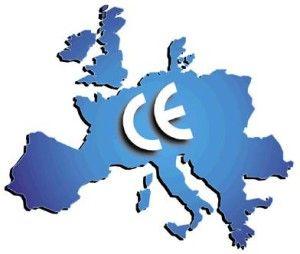 Types of Motor Yachts by Size